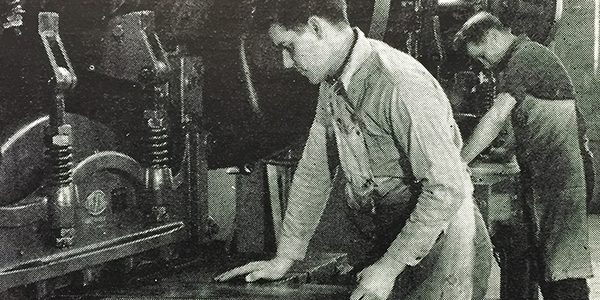 1923: Dayton A. Rogers sets out to create an automatic toaster with a dial for home use. That same year, he devises a method for using temporary dies while an instructor at the University of Minnesota.

1920s: Dayton Rogers has a vision for shortening the manufacturing process on conventional tool and die methods.

1929: Dayton Rogers Manufacturing is formed. “Short run metal stamping” is off and running.

1940s: During WWII, Dayton Rogers manufactures integral parts for the air and ground efforts, contributing to the war effort.

2019+: Let’s partner together to see what the future will bring!

Our story begins in the 1920s, when Dayton A. Rogers first conceived his vision of shortening manufacturing processes on conventional tool and die methods. As a University of Minnesota Engineering Instructor, Dayton tasked his students with building an outboard motor – and put the wheels in motion for pioneering an industry, and growing it through unrivaled standards of quality and service. In 1929, Dayton Rogers Manufacturing Company was formed. “Short Run Metal Stamping” was off and running, and the business of metal manufacturing was altered forever. By producing small quantities of stamped or pressed metal forms  – at a fraction of standard costs – Dayton Rogers made improvements, inventions and production efficiencies accessible and affordable to engineers, innovators and artisans alike.

From humble beginnings came early success – including the dial up toaster, the dry mounting press, and intricate Kodak typewriter tooling. Dayton Rogers began to grow. A WWI veteran, Dayton contributed to the WWII victory by manufacturing integral parts for both air and ground efforts. To this day, Dayton Rogers Manufacturing proudly provides superior components to our military and aerospace industries – as well as medical, industrial, energy and everything in between. Our philosophy is, and always will be – your ideas and our capabilities know no boundaries. From toasters to satellites.

As an educator, Rogers never lost sight of his basic tenets of continuous advancements and sharing that knowledge with his peers in engineering and industry. Rogers’ core convictions and pioneering spirit continued throughout his career, and are still reflected in the company today.

For 90 years, we have partnered to make your metalforming project a reality. Innovation, quality and service are our three core tenants. Let us be on your team to better community, industry and lifestyle from now and into the future.